All protective clothing and equipment has to conform to certain UK, European and international standards – EN16689:2017 is the European standard for technical rescue clothing for firefighters.

It’s important that brigades have access to a range of protective clothing for their firefighters, especially as fighting fires accounted for only 28% of firefighting incidents in the UK, according to the latest data.

We thought it would be useful to explain what this standard covers and how it’s different to the other main standards for firefighting clothing.

What is technical rescue?

In firefighting terms, technical rescue refers to shouts which don’t involve structural fires. The term technical rescue applies to incidents such as road traffic accidents and working around collapsed structures, often as a result of natural disasters such as landslides. Usually there’s limited exposure to heat and flame. Incidents could also involve working in public places or in confined spaces.

As a result of the types of incident that technical rescue clothing is needed for, the specification for this type of kit is different to the usual fire-fighting kit, which needs to primarily protect against heat and flame.

What does the standard cover?

The standard covers a range of factors including clothing design and performance levels. It also specifies the way clothing meeting the standard should be tested. In particular, EN16689:2017 specifies minimum standards for:

There are other standards for different types of rescue, including EN469, which is the standard used for protective clothing intended for fighting fires and EN15614:2007, the standard for wildland fires.

Our Technical Rescue range all conforms to EN16689:2017, along with other associated standards covering footwear, helmets and gloves.

Available in a range of colours including red and navy, the range has been carefully designed to ensure that it performs under technical rescue conditions. Our extensive research with firefighters means this kit also has everything you need – from pockets in the right places to reinforced knee pads and adjustable ankle and waist tabs on some garments.

Many of our technical rescue products also double-up as wildfire firefighting gear, meeting EN15614:2007 as well.

FlamePro’s committed to providing kit that you'll be happy with for years to come. We want to work with you to analyse your needs and protect your firefighters lives to the fullest.

We want to work with you to provide the perfect solution:

Request a Quote
We want to work with you to provide the perfect solution: Request a Quotation
Professional Laundry & Repair 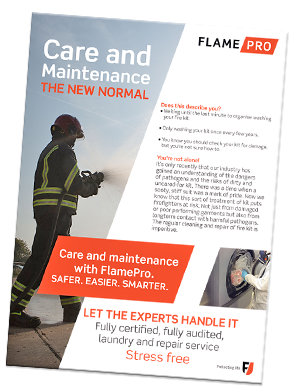 FlamePro staff will arrange everything for you, and work with our partners to ensure everything runs smoothly.

LET THE EXPERTS HANDLE IT